Rwanda
Overview
Since 2005, Charles R. Drew University has been working in partnership with the Rwandan Defense Forces (RDF) and Drew Cares International (DCI) to implement an HIV/AIDS Treatment and Care grant funded by the U.S. Department of Defense/PEPFAR. This partnership seeks to improve the treatment options for RDF personnel, family, and community living with HIV/AIDS, and thus reduce the national prevalence rate. This is achieved through coordinated programs and services, including:

In addition, the partnership seeks to improve HIV prevention among RDF personnel, family, and community through

These efforts have been aided by the implementation of an innovative mobile clinic program that provides comprehensive HIV services to RDF personnel in remote areas throughout the country and through the introduction of psychosocial assessment and support services. 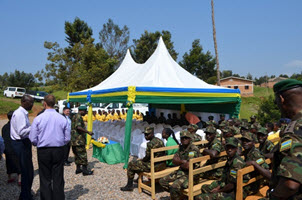 The country of Rwanda covers an area of 24,670 square kilometers with a population estimated at almost 12 million people, the highest population density in East Africa (416 inhabitants/sq. km.; 27th most dense globally) and a high population growth rate (currently estimated at 2.6%, which is down from 3.2% per annum as recently as 2008). Although improved, life expectancy at birth remains poor, currently estimated at 58.1 for men and 61.1 for women and 59.6 for the entire population (160th globally). While Rwanda is one of the poorest countries on the continent, with a gross domestic product (GDP) per capita of $652 (2010 estimates), the economy is currently growing at a faster rate than its population--7.8% through most of 2012. It is currently the fastest growing economy in the region. 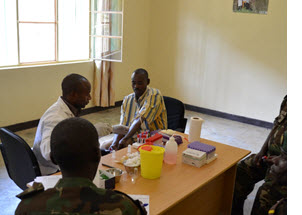 In 1994, Rwanda attracted worldwide attention as a war and genocide led to the deaths of an estimated 800,000 to a million people. Since the war, the population has become increasingly mobile, with large segments of the population moving to the cities, particularly Kigali. Rwanda considers its population as its fundamental resource and banks on it for its future development. As such, the government of Rwanda has developed policies to ensure the longevity and quality of life of its current and future generations. The success of Rwandan population policies is evident in the fertility rate, down from 8.29 in 1981 to 5.34 in 2011; current Rwandan projects a further reduction to 2.2% by 2020.

Although the state of health of the Rwandan population has improved significantly over recent years, improving its health resources remains a major goal. Reducing the prevalence of both malaria and HIV remain important targets of current national and international efforts.

Staff:
Eugene Sangano, MBA - Acting Country Director
Eugene Sangano holds an MBA from The Maastricht School of Management|The Netherlands and is currently the Interim Country Director for Drew Cares International (DCI) in Rwanda. He has spent the last 8 years serving in international NGOs working with military programs in the Health sector in Rwanda.

Mr. Sangano provides overall coordination and implementation of HIV/AIDS prevention, care and treatment activities within the Rwandan Defense Forces, one of CDU's international health programs through its partnership with the U.S. Department of Defense/PEPFAR and Drew Cares International. Prior to his current position, Mr. Sangano held various leadership positions for DCI-Rwanda, initially as the Strategic Information Systems Manager. He also served as the Program Develop Director, which included responsibility for designing, testing and implementing data collection tools and training the end-users. Mr. Sangano has also provided leadership for program development related activities such as planning and implementing new initiatives, Monitoring & Evaluation, and programmatic reports to both the donor and government agencies. He has successfully implemented Performance Based Financing (PBF) and Sexual and Gender Based Violence (SGBV) initiatives within the Rwandan Defense Forces healthcare facilities.

Prior to joining DCI, Mr. Eugene worked with Population Service International (PSI), where he served in various positions including IT Manager, IS Manager, as well as leading new initiatives involving Public Health research, including using Personal Digital Assistants (PDAs) to conduct surveys, an initiative he implemented and served as a trainer in the five countries of the East Africa Community (EAC).