OVERVIEW
The Military HIV/AIDS Prevention Program in Jamaica began in August 2009 and is concerned with building the capacity of the Jamaica Defense Force to respond to HIV and AIDS. There are five components of project activities implemented with the technical assistance of Charles R. Drew University. These include: Strategic Planning; Leadership and HIV Program Management Training; Voluntary Counseling and Testing (VCT) include mobile VCT; Behavioral and Serologic Surveillance; and Management. To date some of the project's main achievements include i) the development of a draft policy for routine education and screening for health lifestyles, and the draft policy on confidentiality and non-disclosure of service members' health status; ii) training and certification of 18 service members in HIV Rapid testing, and training and qualification of 23 service members as VCT skill providers; iii) a Behavioral and Serologic Survey, which was conducted on 8-19 November 2010. During this event seven hundred and eight (708) service members completed the surveys, and 602 opted for HIV testing. Information from the BSS will be used to develop future HIV prevention programs for JDF service members; iv) an Audio Computer-Assisted Self-Interviews (ACASI) post-test negative counseling module was developed by CDU staff to support the VCT services and occasionally supplement the VCT counselors; and v) development of a tri-fold pamphlet on the JDF Policy on HIV/AIDS. Additionally, laboratory equipment, namely a laboratory refrigerator, a microscope, a centrifuge and two pipettes are currently being procured by CDU to support HIV testing at the integrated health facility of the Jamaican Defense Force's main base in Kingston. 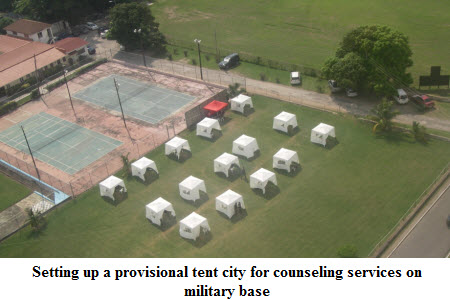 There is an estimated 27,000-32000 persons in Jamaica who are HIV infected. All 14 parishes are affected by the epidemic. About 73% of all the reported AIDS cases in Jamaica were between 20 and 49 years old; 87% of all cases were between 20-60 years old. There is a total 1.7% prevalence rate in the country 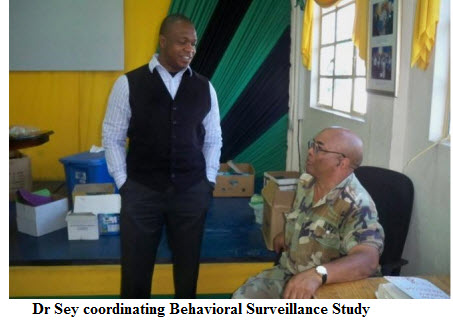