CDU COLLABORATES WITH THE BELIZE DEFENSE FORCE,
US DEPT OF DEFENSE & PEPFAR 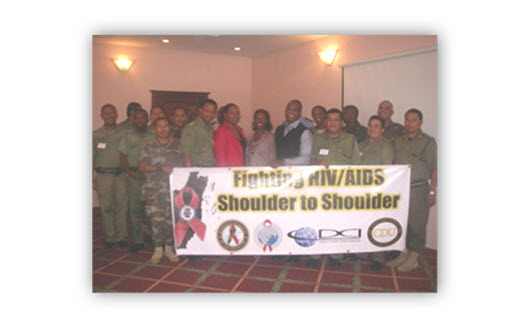 Charles R. Drew University had been engaged with the Belizean Military HIV Prevention Program since it was officially launched in May of 2010 with the technical and financial support of the US President's Emergency Plan for AIDS Relief (PEPFAR) and the US Department of Defense HIV/AIDS Prevention Program (DHAPP).

For the first time ever the Belize Defense Force (BDF) was involved in a behavioral surveillance and seroprevalence study (BSS). Through this study, the attitudes, practices and beliefs of the soldiers were captured and also the HIV prevalence of the force was assessed. CDU collaborated directly with the BDF to form an 18-member HIV Response Committee, and to develop a 3-year strategic plan, an HIV policy, and a Behavior Change Communication Plan. With the technical and administrative assistance of CDU, the BDF also established a second Voluntary Testing and Counseling site at Camp Belizario in the Cayo District. CDU played an instrumental role in helping to develop BDF-specific prevention messages, logo, slogan, promotional items, and educational materials to raise awareness about HIV/AIDS.

Belize, population 356,000, is the only country in Central America that is English speaking. Belize is situated on the Caribbean Sea, south of Mexico and east and north of Guatemala. In area, it is about the size of New Hampshire. Most of the country is heavily forested with various hardwoods. Mangrove swamps and cays along the coast give way to hills and mountains in the interior. The first known HIV case in Belize was in 1986. According to 2007 estimates, Belize has the highest prevalence of HIV (2.1%) in Central America and the third highest in the Caribbean (UNAIDS 2007). The majority of new infected cases affect individuals within the 20-34 age groups. The geographic concentrations of HIV cases are located in the downtown Belize City district. The Belizean Ministry of Health has played an active role in many programs focused on HIV surveillance and prevention.

The Belize Defense Force (BDF) is keenly aware of the importance of maintaining a healthy defense force and has a strong interest in HIV prevention. The BDF consists of approximately 1,000 active personnel supported by 700 reserves, with a primary task of defending the nation's borders and providing support to civil authorities. As a respected group within the country they possess the potential to make an impact in reducing HIV infections. As the leaders within their communities, military personnel trained in HIV prevention can sensitize other military peers and community members to the importance of behavioral risk reduction. Targeted messaging and policies can help reduce risk behaviors and attitudes within the military and with their partners.

The overall goal of this project was to increase the capacity of the Belize Defense Force (BDF) to prevent HIV infection and to promote voluntary counseling and testing among military personnel, their families and their community.

Objective 1: Develop a written strategic plan to address the needs of the BDF in responding to the challenges of HIV in the military and surrounding civilian populations.

Objective 3: Promote voluntary counseling and testing (VCT) of HIV for military personnel, their families and their communities. 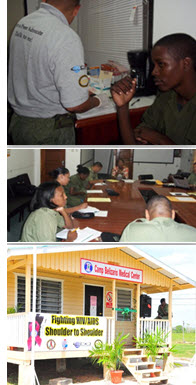 The Belize Defense Force is a brigade-sized organization with two infantry battalions, an Air Wing, a Maritime Wing, a Logistics Company and a Volunteer Battalion headquartered at Price Barracks, Ladyville. In order to facilitate operational commitment throughout the country, there are established Camps in three of the six districts. There is the Fairweather Camp in the Toledo district, Camp Belizario in the Cayo district, and Eyles Camp in the Orange Walk district.
Unofficial reports received through the Force Medical Officer's office reports that today's prevalence rate for HIV within the force is at 0.7%. The majority of these figures account for males at 0.6% and females at 0.14%. Although the figures for the females continue to remain low over the years, it should be noted that in 2001 and 2002 there were no reported cases among female soldiers. Today, however there are 2 cases of infected females soldiers.

The Force Hospital has the sole responsibility to provide definitive care for soldiers and families living with HIV/AIDS. While this disease remains a personal issue, no infected soldier has come forth to serve as a strong advocate to effect change within the Force. This is an indication that the level of stigma and discrimination still remains very high among the Force.

Through the firm commitment and efforts of the Commander and the Force Medical Officer, the Belize Defense Force received support from the US Southern Command and Charles Drew University to train soldiers and formulate a three-year strategic plan. In 2011, CDU staff facilitated the first HIV Management & Leadership training with 28 high ranking members of the Belize Defense Force. The recruitment and training of 35 peer advocates across the various camps and different ranks has strengthened the capacity of the BDF to respond to HIV/AIDS concerns within the force.
An official handover ceremony occurred on February 17, 2014 at 1400 hrs. at the Force Hospital Conference Room and was presided over by the Force Medical Officer. In attendance were the Deputy to the Brigadier and approximately 30 BDF personnel to celebrate the achievements of the partnership with CDU. The BDF was encouraged to fortify their commitment to reach and educate their troops about behavior change and HIV prevention. CDU representatives in attendance included the Project Principal Investigator from Belize and the Operations & Program Manager and Project Director/Principal Investigator from Los Angeles.